The Singing Wells project attended the World Music Expo this year in Cardiff.

The festival lasted from Wednesday 23rd to the 27th of October. The trade fair and conferences were held at the Motorpoint arena, with the evening showcases and events held at the Millennium Centre in Cardiff Bay.

For our first visit to Womex, we booked a stand at the trade fair, with the main intentions being to spread the word of the project and the work we are doing in partnership with Ketebul Music. Ketebul have attended Womex before, and we would have benefited from the presence of our partners on this trip, but we were a last minute addition to the program.

This was our stand after setup (note the obvious mistake in the nomenclature….): I attended a few of the conferences arranged by the organisers.

Revenue streams in the digital environment was the first of these and looked at different examples from different territories – the main example being given as the Caribbean. This is an area we will need to look closely at, if we are to make the Singing Wells library commercially available at any stage in the future.

In the ‘Growing your audience through Social Media‘ conference, the production team from BBC Radio’s Jazz on 3 led a discussion on social media and how it can be used and has been used to increase interaction with the program. One interesting idea was when they held a Google hangout between guest Moby and a few of his friends and live streamed the result on YouTube – something I am keen to try in the future.

The Evolving Markets discussion looked at both the African and Indian markets and how the markets are evolving. India was a particular suprise here – in a population of 1.2 billion, 50 % are under 30 and consuming music. In Africa – 60% have electricity whereas 86% have a mobile phone. This is again another area in which the Singing Wells project may be interested in the future – mobile phones and ring back tones as a method of delivery for music.

Mike and I also attended the African music networking session which became the launch for a new initiative by the Cape Verde government. It has been calculated that music is their biggest export and so has set up the African Music Forum to make it easier for musicians to make a living – from visas and flights to financial support. It is an exciting time, and seems to chime in with what Eddie Hatitye announced for Music in Africa.

Members of the Music Producers Guild led a discussion on ‘What do producers actually do?‘ – the answer seems to be ‘everything’. The role of producer has many meanings, but it seems to me (as a producer) that  it is the role of a project manager. Working with a budget and creative energy and materials to create an end product. We were pleased to get a mention from our new friend Eddie Hatitye who was announcing the Music in Africa project he is heading up with support from Siemens and the Goethe institute in South Africa. The board of directors of Music in Africa includes our good friend and project advisor to the Singing Wells Bill Odidi. The project is to provide an online portal for African musicians to showcase their work, and it looks great. Hopefully we can help the project and work together in some way in the future. Mike and I were present at the opening concert – curated by Cerys Matthews at the fantastic Wales Millennium Centre in Cardiff Bay.

The show was a showcase of traditional Welsh music including performances from Matthews herself, The Welsh Ballet and The Treorchy Male voice choir.

I heard a bit of a day showcase from the Emily Portman trio on the daycase stage at the Motorpoint arena.

Louise joined our trade fair neighbours from New Zealand at the Daycase stage to hear a showcase of Maori music.

We also managed to pop down to see two performances on the Friday night – again at the Wales Millennium Centre and in a tent erected outside. In the Weston Studio we saw the magical Ross Ainslie and Jarlath Henderson, who after a 9 hour car journey had almost not made it in time. Jarlath popped via our stall the next day at the trade fair, and so left with a copy of the Singing Wells CD sampler to enjoy in the car journey home again. We then crossed to the tent to catch Scottish band Lau, who gave a stirring performance despite the poor sound in the tent arena.

I visited the film screening room to see two of the films being shown – Encounter at the Cello Bienalle – by Myles O’Reilly – featuring the music of Dutch cellist Ernest Reijseger. Myles has a great eye and manages to tell a story well with little narration required – he is a talent we hope to work with in the future.

The second film was ‘Sweet Dreams’ – and tells the story of the first female drumming group in Rwanda, and how they formed a co-operative to open an ice cream shop in their town.  The film tells the story of how the idea was born and how they managed to get the idea and the shop off the ground and into reality. The film is also punctuated by stories from members of the group about their experiences in the genocide. It was a great watch and the group would be one we’d be keen to work with if we venture to Uganda. Find out more about the film here: http://www.sweetdreamsrwanda.com/

New Friends at the festival

We met a lot of new friends – as that was the point of our being there. We were spreading the word of the project and its aims and objectives, with listening stations for passers by to listen to the music we had recorded. We had a few instruments from our collection on display, and some even got played by some of our fellow Womexians as this photo from Louise shows: 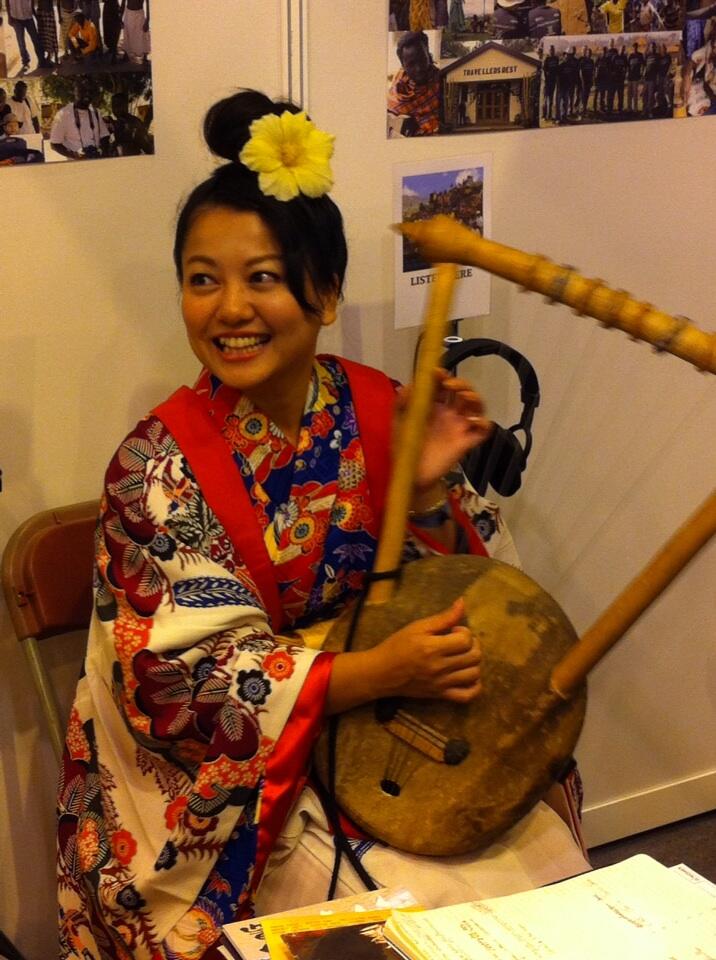 I gave an interview for Icelandic radio about the project.

And around 150 people entered our competition to win an iPod shuffle – direct from one of our listening station. We’ll be making the draw soon. Cards in the Kalabash

We were pleased to host a few meetings for our friend Guy Morley who used our stand as a meeting place. We were delighted also to find that there are quite a few other people undertaking similar projects in Colombia, Cameroon and Madagascar – and we look forward to inviting these groups to become partners in our association of sound recordists, once we set it up.

There were a lot of countries represented at Womex – showing the important shift that governments are making towards music as a whole – seeing it for the essential export it is.

The Musicians Union were also present, championing musicians rights. We were also linked to Horizons – via the British Underground and our membership with the Association of Independent Music. Horizons joined up members from England, Wales, Scotland and Ireland.

We were pleased to be sited next to New Zealand across the way and next door were South Africa!

Andy recorded a few snippets of audio for an upcoming podcast – which will feature on the site soon.

A big thanks to Mike and Louise who were marvellous evangelists for the project over the course of the 4 days. Here is a picture of us all at our stand: We were intrigued by the two fellas with a load of equipment at the end of one of the rows on the other side of the hall – they seemed to be doing something with records… Further investigation showed us that they were creating vinyl records from CDs  – they would do one track free of charge. We are therefore now in possession of a copy of a Vinyl record with the track Missing on it! One for the Abubilla collection certainly!