It’s our fourth day of the trip (second recording day in the field) and, despite difficulties with internet connections, we are still managing to keep you posted on our progress and had an extraordinary moment when we received a Skype call from Andy in the UK and he actually joined in a live Influences session!

We woke up after a second night in Kitale and drove 56 km to Kapenguria to record the Pokot tribes.   The country side was beautiful – very hilly, with round thatch huts peppered along the green and red hills.  Like Uganda and Rwanda, the countryside here is green with slashes of deep red as the soil is turned or roads are made.   We arrived at the location picked by 50 Cows, the fixer, but we decided it was too close to the road and asked to be taken to a more secluded spot near a village or homestead.  We got what we asked for and were rewarded with a 4 km drive straight up one of the hills through homestead after homestead until we arrived at the top of hill with 360 views.  The little homestead had a lovely round house with thatched roof, a rectangular hour and a couple hen houses.  Cows kept us to the pathways.  We couldn’t have asked for a more beautiful location – looking down on the farms all around us, baked by the sun, but cooled slightly by a continuous breeze that ran through the tall trees. When we got back to our hotel in Eldoret (128 km of hard night time driving), long after darkness fell,  we added up the day, in wonder at the numbers of songs we recorded:  5 groups, 33 songs, 3 Influences Sessions and 2 Magic Moments.  Pokot music is all about the dance and vocal harmonies – most music with origins in nomadic tribes is about the dance/vocals not the instruments, because at best you could carry a horn during your endless movement.

This groups walked 120 kms from their town in Lamut. They were a younger group, tall and thin, divided between male and female dancers. They performed explosive short dances, each with a clear story dramatically acted out.  They were dressed in striking blue costumes. We recorded 10 songs with them:  Kaseta, Kitok Pokot, Chepo Ktpsot, Chelimo, Kech, Chepng’aror, Kalokeya, Suma Agenge and then returned to do an Influences session on Kech and a Magic Moment.  The Magic Moment focused on their extraordinary ‘pogo’ style dancing, jumping up to 20 inches off the dirt floor in the homestead.

Throughout the recordings, a lovely woman of about 70 could not keep from dancing.  We loved it, although the owner of the homestead kept trying to have her sit down.  She would start by sitting with the group and moving her arms to the beat.  Then she would begin to sing, and then she would stand and sway, and then she would begin to dance around and gradually would join the band.  She simply couldn’t help herself.  That is the power of music.  We will try to put together a video clip of her best moments. 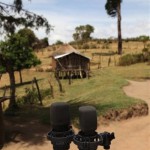 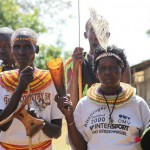 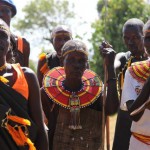 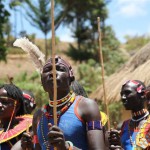 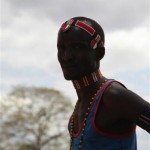 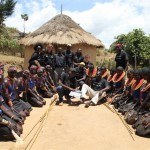 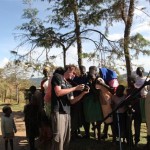 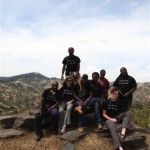 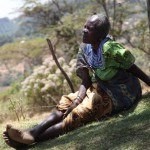 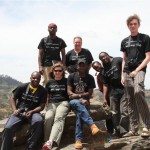 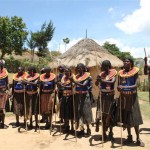 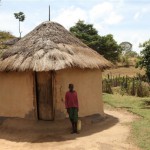 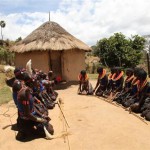 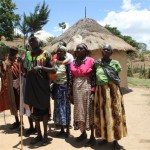 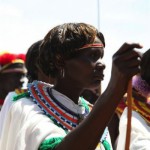 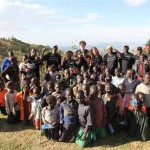 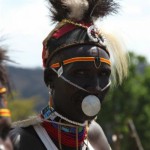 Everything else from today can be divided into three key events.

First, we survived the drive.  There were a few scary moments, the first being driving to the village for the shoot – straight up a very steep hill.  This was not a hill for most humans and certainly wasn’t a hill for cars and certainly not cars filled with Ketebul folks and all our equipment.  We got up and down, but we imagine there were a lot of prayers said during those 20 minutes up and down!

Second event: we are up on a hill with 360 degree views  – a patchwork of little farms, with no electricity, no water and little exposure to the modern world.  And Andy back in the UK call Steve on Skype and we have a video call.  Moreover, we put Andy (the laptop) in the middle of one of the tribal groups and – get ready – he plays guitar to the song and we complete an influences session.  The dancers were already pretty amused by the microphones and the video cameras. But they were far more amused by the computer on a table during their dance, playing guitar.

Third key event: we travelled back to Eldoret and are staying at the Eldoret Club.  This gave Jimmy time to do detailed interviews with Eddie and Nick.  There are separate blogs here, which provide some more observations on what Ketebul Music and and now Singing Wells has done to the team’s view of modern music and more importantly, African music.  For the record, the Ketebul crew all reported that the meal at the Eldoret Club, where we are staying,  was the first great meal they had on the trip.