We left around 9am from the Eldoret Club to start our third day of recording, this time with the Marakwet tribes.  The drive was long but spectacular.  Our journey took us from Eldoret to Iten, the home of Kenya’s world class athletes.

Most the Olympic gold medallists among Kenyan athletes live within 100 kms of Iten and it has become the legendary source of great long distance runners.  Over 1,000 Kenyan runners train here and the roads are filled with athletes training for London 2012.  In addition, over 300 foreigners train here, mostly from Europe. We went to the main training centre and interviewed a project manager about why so many people travel all this way to train on the red dirt roads around Iten.   She answered:  “First, the altitude (roughly 2300 meters) is perfect – right at the peak of natural altitude where you can still train hard, but so high that the lungs are pushed to the limit.  Second, for such high altitudes, the weather is great and allows year round training.  Few places at this altitude allow year round training.  Third, Iten is all about inspiration.   Foreign athletes are motivated by all the Kenyan runners.  You feel part of something huge and are surrounded by amazing runners.  But there is also a mystique to the place and foreign runners feel like some of the magic might rub off on them.”   Because the Olympics were approaching the place was filled with runners and documentary makers, all telling the story of this beautiful place.    In fact, we were confused for a CNN crew! You can read more about Iten and its famous athletes here: Running with the Kenyans

From Iten there is a beautiful tarmac road that leads to Nokuru travelling down the Rift Valley.  We will take this ride tomorrow.  For today, however, in the words of Robert Frost, we ‘took the road less travelled.’  We left Iten on a red, dirt road.  The athletes ran on the sides and our car and jeep travelled in the middle.    While the countryside was beautiful, the roads left a bit to be desired and we bumped and jostled for about 80 kms.   The land is tilled now, waiting for a new planting season, so we are surrounded by red.  The red roads, the red tilled soil on either side, the red dust filling our eyes and lungs as cars pass us.  We have the opportunity to interview Tabu in detail about his ancestry.  The only issue was, the more animated he became, the slower we went. So we knew that the more interesting the trip the longer it would take and tried to get the balance right between good questions to Tabu and long silences to let him drive faster.

80kms later we rediscovered a beautiful tarmac road that led us directly up into the hills.  Long, winding roads taking us up and down hills.  Every acre was farmland, even those acres on steep hill sides.  Every few acres there was a beautiful homestead, similar to where we recorded yesterday.  Each had a round house with thatched roof, each had several chicken coops and pens for goats.  Every twenty had an additional rectangular house with pitched roof balcony.  There were no other buildings or dwellings for 10 kms of travel and then a little market would pop up which would be filled with thirty or so stalls. Then more empty roads and lovely hillsides.  We travelled this way for another 80kms or so.  Finally, at one hillside, there was a flat area and we stopped and 50 Cows announced ‘we’re here.’  We tried to find a recording site out of the burning sun but failed.  We wanted the lovely 360 views and sacrificed shade for our art.

The first group was the Kasagat Traditional Dancers.  Kathy talked to the tribal elder about them.   They come from Tot, about 50km from where we were recording. They had walked here the night before and had been practicing all night and morning before we arrived at noon.  Most of their songs are about peace and unity  between the Marakwet and Pokot tribes. They are also about important historical events and praising ceremonies such as weddings, births, circumcisions and funerals. They are also used for passing information on from generation to generation. The younger generation also sing but they did not come today. They mainly have older members in their group.

The group have never been recorded before today and they were very excited about others hearing their traditional music.  Kathy spoke to them about their dress and its significance. The white paint in lines and crosses on the men’s arms represents the River Nile and where the tribe originated from. They came from Israel to Egypt along the Nile to the Sudan. This occurred in the 18th century. The women have white dots on their arms and faces representing the soil and harvest. The white paint comes from a special kind of soil and only one person in the tribe keeps this soil as the custodian. Their aprons are made out of goat or cow hide and signify prayers and blessings to the rain the river they came from. The aprons are decorated with beads, cowry shells and bottle caps hanging from the bottom. The chief’s hat is made from Colobus Monkey fur and his cloak is made from goat and cow hides. Usually this cloak is worn by a man when he comes to ask a woman to marry him. One singer carries a horn used to call people to come together, if there’s an attack or a meeting of the tribe.

The women wore small gourds around their necks that would contain oil used to smear on people after circumcision. They also wear beads crossing their chest which are given to them after female circumcision. Their belts are decorated with cowry shells and are used to drape over a woman’s abdomen when she is giving birth to protect the baby. The cowry shells hanging down from the woman’s neck signify that she has had twins. This is a huge honour and the women wear them while they sing as celebration of fertility and women.

The second group were the Embolot from village Kamogo. They live in the forest as farmers. Honey from the forest is an important part of their diet. The white paint on their faces also represents the soil as with the Sagat. Their songs included: 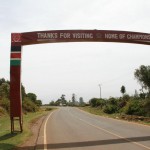 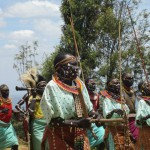 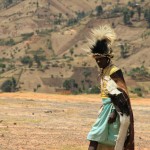 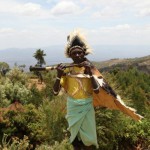 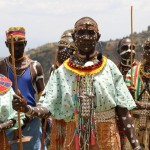 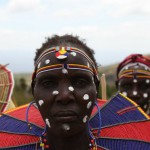 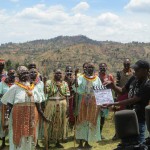 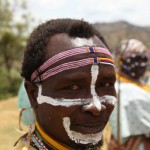 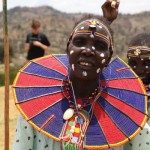 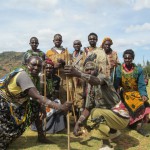 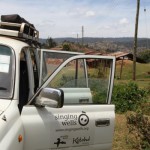 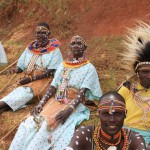